This post presents some of my own views. It does not represent or reflect the views of the institution that I work for.

The post comes about as a result of a late night and early morning Twitter exchange and after hearing about the obscene charges a publisher has quoted us for perpetual licenses to academic e-texts. 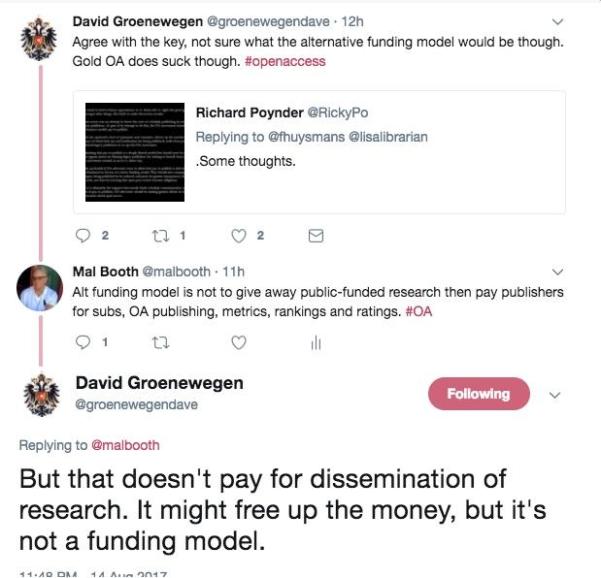 I don’t always agree with Richard, but I do in this case. Pay-to-publish Gold OA is defective and not sustainable; the research cycle does need more transparency; and there is a need for more public involvement in discussions about Open Access.

Publicly funded research in many universities, like those here in Australia, is not shared openly and the tax-paying public pay for it many times over:

1. Government funded universities.
2. Subscriptions or purchases of all the research that is given away for free, mostly to several large publishing houses who own most academic research in the many ways discussed below.
3. We pay for any research that has to be made Open Access in the form of outrageous “Article Processing Charges” (APCs).
4. We pay the same publishers for access to systems that give us metrics and indexes on who is being read or cited the most, etc. (Scopus, Web of Science, etc.).
5. We pay many of the same publishers to join their ratings and rankings games so we can boast about how well we are doing in a relative sense.

I realise that many in the “game” know all of this already, but most of the public will not. This system is responsible for generating revenue and profits for these legacy publishers that are well in excess of the margins earned by major media companies, and probably higher than those posted by Apple, Google or Amazon (see https://www.theguardian.com/science/2017/jun/27/profitable-business-scientific-publishing-bad-for-science). Most universities struggle with the ever increasing costs outlined in the points above and students certainly struggle with the rising costs of access to either print or electronic textbooks that are published by these legacy publishers. Some academics are also frustrated and doing something about it as illustrated well in this recent (July 2017) post from Professor Timothy Gowers. His frustrations with the current dissemination model are neatly outlined in the first paragraph. Those on whom research is done rarely can access (or benefit from) the results and they too are getting fed up. For example, vulnerable and disadvantaged communities – what do they see for all the research done and does life change for the better?

I think the current system of scholarly publishing (covering monographs, journals and textbooks whether print or online) is held back by legacy publishers who still benefit from it being based upon a print mindset. Universities must rethink this outdated model and try to realise the potential of the internet age that can be achieved through better use of networks, connections and more collaborative communities of shared interests. I know this sounds idealistic, but it has happened in many other sectors already. Academia has been reasonably slow to move and slower to adapt and change its habits. One of the many challenges will be in bringing around those senior researchers who are tied to the current system and who also benefit from it in terms of reputation. My observation is that many junior researchers can actually see a better way to disseminate their research and I think their experience with the internet has led to a more altruistic attitude to sharing their knowledge.

We should look at the best examples of this on the internet. If scholarly publishing really is about knowledge sharing, then it needs to be more like Wikipedia than Encylopedia Brittanica, more like the HuffPost (distributed, connected contributors) than legacy news media, and more like AirBnb than traditional hotels. We need to look at things like Reddit for discourse, GitHub as a model for sharing and collaboration and BitTorrent as a model for peer-to-peer sharing and fast large scale data transfer.

If we decide to devote our efforts to more collaborative and cooperative shared platforms more will be achieved and be sustainable in the long run. I think we need to let go of the old ties to print models of books, journals, and textbooks and the associated delays in publishing, editions, restrictive licenses, and competition. We should rather: encourage the use of shared platforms; curate open online collections; recognise the value of Open Educational Resources; use Creative Commons licenses; seriously attempt to sort out and implement open peer review; and value reuse, unbundling, remixing, repurposing and lively discourse through interactivity. John Seely Brown might describe this as a move from “Stocks” (protected, static or fixed assets) to “Flows” (tacit, created evolving forms of knowledge). I think he would also encourage us to stop waiting for perfect.

Finally, here are some other suggestions, based mostly on some reading that I did last year in Kevin Kelly’s The Inevitable:

As Gerard Hoffnung would say “That’s All!”.

FromMelbin Blog by Mal Booth is licensed under a Creative Commons Attribution-NonCommercial-NoDerivatives 4.0 International License.
Based on a work at malbooth.com.