I feel somewhat conflicted writing this review less than 24 hours after the Orlando massacre. The film is very violent, but not in the same way as Orlando and although it is lame to make comparisons to other film-makers, it is not quite in Quentin Tarantino’s territory, let alone Sam Peckinpah’s in terms of gun violence. I may have reacted somewhat differently if I’d heard of the Orlando tragedy before seeing the film, but to be perfectly honest about my reaction, I found War on Everyone hilarious.

John Michael McDonagh is a brilliant film-maker and he really understands how to entertain an audience. It isn’t going to be a film for everyone, but I think a lot of lesser directors could really learn from his method. His story telling in Calvary was so much more effective than a much darker heavy-handed approach that may have been taken by many others. This is no Calvary, but it is just as wonderful an experience as a film. Although it obviously deals with real issues like gun violence, corruption, greed, child abuse and the vast multi-cultural nature of many modern societies, there seems to be no attempt to impart a strong overall moral message: it is simply a lot of fun. It certainly doesn’t make me want to head out and shoot or beat up some bad guys.

Alexander Skarsgård and Michael Peña are great as Terry and Bob, two bored cops who enjoy the excitement of breaking rules and amusing themselves at the expense of others in Albuquerque. Their dialogue, written by John Michael McDonagh again demonstrates his great facility with the English language, even in an American setting. Some of the lines might be politically incorrect cliches in the hands of others, but in this film they very elegantly sewn together throughout the film and I just laughed and laughed the whole way through it.

Bob has most of the wise-cracks but every now and then Terry throws a very funny or a very stupid line in that broke me up.  Alexander Skarsgård is very easy on the eye as Terry and his physical presence and character have me wondering whether he has become a contemporary John Wayne type of film hero. In this film he moves with the grace of a cat and even dances in one of the funnier sequences, but he also displays genuine physical vulnerability and empathy for a young boy who has been abused. His physicality is also on display during a fairly long on-foot chase sequence. It is perfectly framed and I’d say it is mostly Alexander doing his own running.

I know that comparisons are lame, but I felt this film was more like a Coen Brothers feature than a Tarantino shoot-em-up. The ludicrous lack of reality and its great use of the ridiculous make this film a stand-out for me. There are several very memorable sequences in the film that whilst completely absurd and unexpected, illustrate John Michael McDonagh’s brilliance with visual humour. These include Terry’s dance sequence, a brief sojourn to Iceland (go figure), the opening shot when they run down a mime artist getting away from a robbery, the cocaine sniffing shown in the clip above and Terry and Bob practicing their gun handling on an indoor shooting range. It doesn’t stop there. Through almost the entire film we are treated to Terry’s obsession with the music and lyrics of Glen Campbell’s greatest hits.

So, if you don’t mind this kind of thing, see it if you get the chance! You won’t regret it. 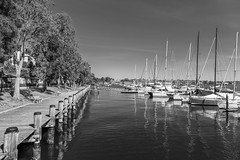